Last time we went through the very basic components and today we will finish what we started. So far, all components have been put directly on the form, but sometimes it’s suitable to divide the components from each other or it’s necessary to put on the form more components than it’s its capacity. 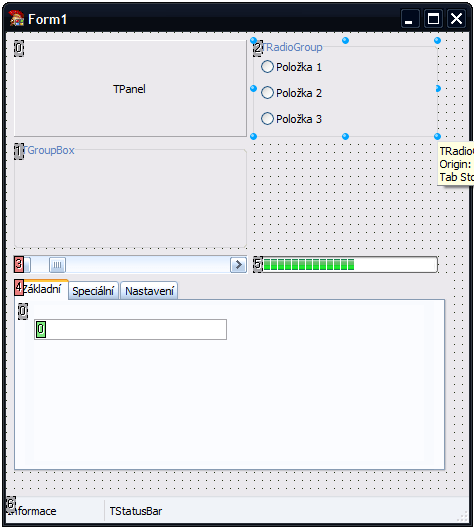 TPanel and TGroupBox differ in an appearance where TPanel is often used as an invisible container (it sets a property Bevel* to value bvNone and Caption to empty text) whereas TGroupBox is used for visual highlighting for groups of components.

WARNING: In case you set Visible:=False, all components in a panel or groupbox become invisible. And the same applies for Enabled.

This component is often a part of other components – as a simple scroll bar. But once in a while you have to let user to move with something. That’s when you use this component.

On the other hand, when we want to show user a status of an operation, we use this component. In the picture it’s the green one.

This component allows us to put more components on the form via markers. It doesn’t just look cool, it’s very effective as well, as in each marker we can put only related components. Every marker (component TTabSheet – a new one is added from a context menu by choosing New Page) has Caption, PageIndex (the order of this marker among all markers), Image Index(icon index in ImageList) and TabVisible, which shows and hides a marker (it’s not the same as Visible).

Important thing is that every marker acts like a container for components (like a panel), that means if a user chooses a different marker, components from this marker will be shown.

Other properties and events:

This component is used very often in many tapes of apps. TStatusBar

In the picture you may see this component at the very bottom. It is used for a status indication, a cursor position etc. It can work in 2 modes: 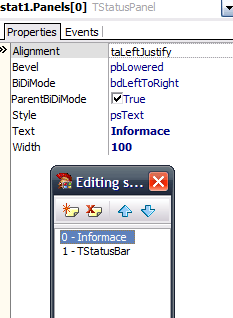 This component is used for a simple icons‘ management which can be used in various components. It’s a non-visual component (it can’t be seen while the program is running).

The editor is launched by the right mouse button above a component and choosing the editor, otherwise a double click on a component works as well. 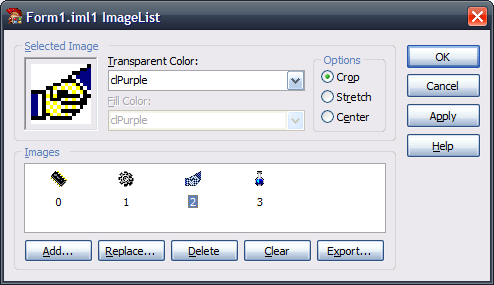 In the picture you can see an editor for TImageList with 4 icons.

If we go back to TPageControl component, we can assign TImageList to a property Images. Delphi automatically assigns appropriate icon to every marker, but this can be changed manually via choosing a marker and by changing ImageIndex. By assigning -1, an icon will not be shown.

It works similarly with other components.

Today it will be rather mini tasks for practicing individual components: